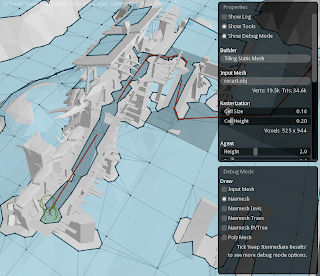 Small maintenance update to Recast. There is no new functionality, but I refactored the GUI and demos.
I noticed that I will need to add yet another, yet slightly different, way to build the data for my current endevour of making a tile based navmesh fro Detour. The current demo is getting too complicated. So I went and refactored the GUI and the generation code that it is easier to create new ways to create and use the data. The Recast API will stay the same, but the way the data is passed to the new Detour stuff will be different and I want to create functional tests for the new code too.

If you are new user to Recast, take a look at BuilderStatMeshSimple.cpp it should get you started how to integrate Recast into your own code. BuilderStatMesh.cpp should give you an idea how to use Detour static navigation meshes. If you want to generate navmesh for larger areas, check out the tiling examples.
Now that the GUI refactoring is done, I can continue adding tiled navigation mesh support for Detour. The idea is that the whole navmesh is composed of several pieces. Just like the tiled preprocessing generates them. These pieces can then be added and removed at runtime creating the basic structure of streaming the navmesh or generating new tiles at runtime.
I have pretty solid plan how to go forward with it. I plan to support the same API as the dtStatNavMesh has, plus some extra functions to add and remove the mesh tiles. I will (slowly) work towards that goal this summer.
Recast and Detour version 1.21

Posted by Mikko Mononen at 8:33 AM No comments: 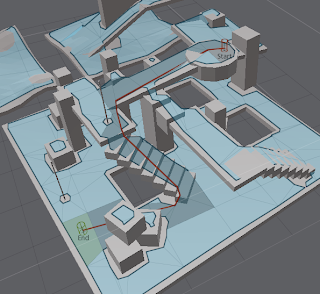 There are other things the tiled structure allows too, for example it would be used for hierarchical pathfinding (HPA*) and certain queries, like finding nearest polygons, can be made faster too.
Posted by Mikko Mononen at 11:25 AM No comments:

I like prototyping. Over the years I have gathered small pieces of code I seem to rewrite every time I land to a work environment. This is my first attempt at storing these interesting bits for other people to use too (and to save myself the trouble of finding the previous version from some half broken hard drive).

NanoSVG is simple and stupid SVG parser that does not need ay external libraries. Just blob the header and a source file into your project and your ready to enjoy vector paths! It is just enough that you can do all your level editing in Inkscape or Illustrator, hit save and play your new level.

I usually use colors to encode different things. For example red squares could be enemy spawn locations and green square the starting point of the player. If you need modifiers, just add outlines, so that red box with blue outline means a grunt with a SMG.

As you might have guessed my prototypes often look like geometry wars. I tend to use OpenGL to draw antialiased lines, points and some text. The point is to build something just enough to get validation or better insight to your ideas.

This version of the SVG parser is based on the Antigrain Geometry SVG example, and I wrote similar parser with Kimmo when I was working with Mountain Sheep.
Posted by Mikko Mononen at 11:13 AM 2 comments:

The digesting duck captures my point of view to game AI so well that it is hard to decide where to start describing it.

I think there are a lot of parallels on how the automatons were build once upon the time and how game AI is being build in 21st century. It is a shame to think how much of the original ideas of those illusionists we have lost. I think we could learn a lot from the observations of the people from that time.

Too much of the game building is though to be magic. Most of the designers (especially ones that have no programming background) I know have a lot of trouble understanding how game mechanics work.

And the most common reason seems to be that they want to believe. They want to believe that there is something magical happening in the code that makes things tick. Just like the people who saw mechanical pooping duck few hundreds years ago.

I think better analogy is that we are building mechanical toys. Instead of popping the hood, we open the game editor or turn on debug views. These visualisations of the inner workings of the game magic should give the designer better understanding how things work. I sometimes feel like the game studios should hire UX people to make the game data more understandable for all the people whore are working on it.

My intention is to make this blog about building the most awesome 'mechanical toys' and share snippets of interesting code.

The title of this post is a 'homage' to my friend's Chris' blog. He does not post often, but when ever he does it is pure awesomeness.
Posted by Mikko Mononen at 10:02 AM No comments: