I just update the Detour status labels based on recent feedback. The code is in in R255. The return value is now bitfield instead of a single enum. This to pass both error messages as well as few bits of information about the quality of the result.

The high level statuses are DT_FAILURE, DT_SUCCESS, and DT_IN_PROGRESS. The rest of the bits are used to describe mode detail about the status. To test if a status is one of the above, you should use the helper functions dtStatusSucceed(), dtStatusFailed() or dtStatusInProgress().
Example:In many cases of success and failure, you can get one or more bits of extra information why things failed or if the quality of result is degraded. The detail flags are:
In case a function call fails, it usually returns only one flag. If a function call succeeds, it may return multiple flags indicating the result quality. The flag DT_BUFFER_TOO_SMALL is also use store/restore tile state and in that case it is returned to describe why the function call failed.

Posted by Mikko Mononen at 4:46 AM No comments: 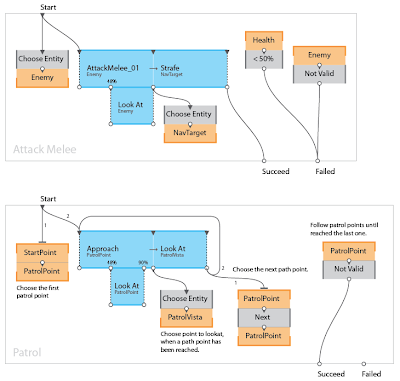 I found this old sketch of a visual language for AI behaviors while browsing through an old harddrive. I think it is from 2006 or 2007 or something. Few notes:
The arrows at the top of the tasks are execution points. When triggered, the task starting at that location will start executing.
There was also a syntax to define how the next tasks would have been triggered. In the above examples the next task is always triggered when the previous on is finished. I had an idea to also have some kind of notation to require all tasks to be finished before the next one was carried on.
The orange boxes are variables. Grey boxes are functions. Some functions take variables as input (could be stacked ala werkkzeug).
I think that "patrol point is not valid" should have a trigger line coming to it from the same bundle where the patrol point selection and restart is triggered (that eval would be 2 and restart would be 3). The grey text in the patrol box should actually read "Patrol(StartPoint)".
The overall design was much inspired by werkkzeug and PD.
Posted by Mikko Mononen at 12:22 AM 2 comments:

In the above video, only the very first path is calculated using regular A* for all agents, after that the path end is adjusted by stretching the path corridor as I have explained earlier.

When the agents start to move, the path corridor is optimized as I explained in my previous blog post.

In the example the path topology optimization is done for only agent per update at most twice per second. Only 32 nodes are visited during the update. Search for optimizePathTopology in CrowdManager.cpp to see how it is implemented.

Feel free to try it our yourself!
Posted by Mikko Mononen at 3:04 AM No comments: 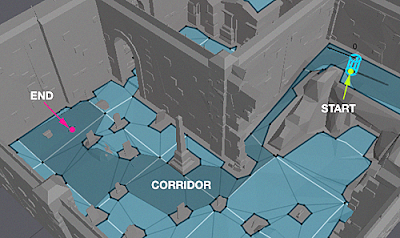 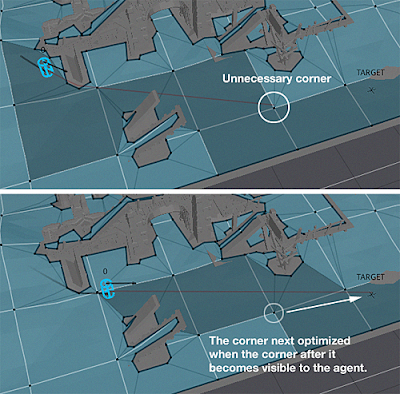 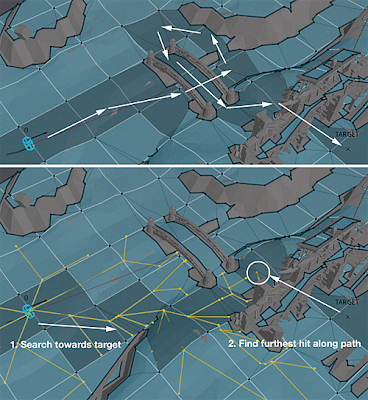 If the agent follows a target, or if it is moving in a large crowd the topology of the path corridor can get tangled up, like in the above picture. The visibility optimization can only handle problems that are visible from the current location but there can be an obvious shortcut which needs a bit more reasoning.
One way to fix topology problems is replan the whole path, but this is very wasteful and the time it takes to complete an A* search is really unpredictable. At worst case when it cannot find the goal it will visit all your navigation polygons!
The topology problems that a human inspector would notice are usually quite local. Only if we could replan the first 20m of the path. Well, yes we can!
One way to efficiently implement path corridor topology optimization is to search towards the end locations using A*, but instead of doing the full search we limit the search to something like 30-50 nodes (step 1 in above picture). This makes sure that we can guarantee that the search returns in finite time.
When the search has been done, we start traversing the existing path corridor from the end (step 2 in above picture). As we move towards the start location, we check at every polygon if it was visited during the search. If that polygon was visited, we trace the graph back to the start and substitute the beginning of the corridor with the trace result.
Conclusion
There are two kinds of optimizations which can be used to optimize the path corridor. They make the visual appearance of the navigation more pleasing. Firstly, we can make sure that we try to aim as far as we can see by doing visibility optimization, and secondly we can periodically optimize the topology of the path so that the agent tries to move towards the goal without taking too obvious detour.
The intuition is that the visual optimization tries to optimize the very near term reactive plan, whilst the topology optimization tries to optimize the medium term plan. The reactive plan should be updated very often, but the mid term plan can be updated less frequently, say few times a second.
Posted by Mikko Mononen at 9:43 AM No comments: