I have been using some idle cycles every now and then to try to think about a nice method to update the navmesh without requiring to completely rasterize and rebuild a tile from scratch. This would be useful for obstacles, which may break and may be pushed around and usually only contribute blocking areas into the navmesh.
Cookie Cutter Obstacles
One method to do that is to punch holes in the navmesh using CSG. Some path finding middleware support that and some games shipped using it. So it definitely works, but I don't like the method.
Firstly, you have to work around the floating point accuracy, which is paramount pain. Secondly, it usually is too accurate, which means that you get some small polygons all over the place. Thirdly, it does not scale well when you have multiple overlapping obstacles. So it is an option, but very very low on my list of things to try.
Local Grid
Another option would be to use local grid and rasterize all the temporary obstacles into it and then use another simple pathfinder to find around the way.
The good thing about this method is that overlapping obstacles is not a performance issue anymore. Because grids often have lower resolution than actual world geometry, they tend to simplify the obstacle area too, so it solves the small triangle problem too.
The down side is that you have second representation of your world. The problem it creates is that what to do when the path is blocked? There is no way to reliably pass that data back to the navmesh and replan the path, as it would require to change the layout of the mesh. Simply blocking certain polygons temporarily does not fix it.
Recreate Piece of a Navmesh
Currently the way I prefer to handle dynamic obstacles is to recreate the tiles where an obstacle has changed. Tiling helps to limit the amount of work that needs to be done. While it works well in practice it is overkill for many situations, including the temporary obstacle case.
That has lead me to thinking that how much of the work that goes into rebuilding a tile could be cached?
In practice the answer is that at minimum you need to have the data that is stored in Recast compact heightfield to rebuild a tile and have the benefits of the grid. At the compact heightfield level each obstacle could be rasterized in the heightfield as specific area type and then the rest of the Recast pipeline would be run to obtain the final mesh for a tile.
There are some shortcuts that can be taken to make the rest of the Recast process quite a bit faster than usually. One optimization is to use monotone region building function. Another one is to use more loose parameters for detail mesh calculation. For small tiles, this can halve the build time which is spent after rasterization.
In practice it means, that if we could start from compact heighfield, we could rebuild a tile on 1 ms instead of 10 ms. And by using the simpler methods the work can by split into similar sized chunks so it is possible to handle the building over several frames.
But compact heightfield can be a lot of data which makes the idea impractical. Only if we could compress it...
Compressing 2.5D Heightfield Data
By inspecting the data stored in the compact heightfield, we can see that the data per span does not vary very much between neighbours. Also it happens to be stored in a way that helps usual compression algorithms to pack it well too. 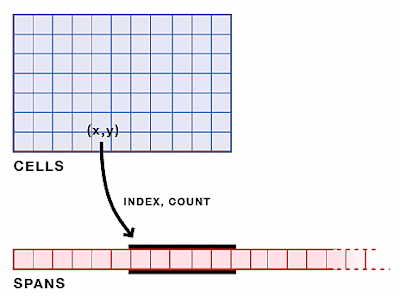 The 2.5D heighfields in Recast are stored as columns stacked on top of each other. If there are multiple voxels on top of each other, they are stored as single span. This is often called run length encoding (RLE).
The spans in compact heightfield are stored in one flat array. In addition to that there is a grid of cells at XZ-plane, which stores index and span count for that column. So when you need to find all the spans at certain location, you first lookup the index to the large span array from the cell and loop through all the spans that belong to the column.
The layout is also awesome to store links to neighbours, you only need to store a small sub-index, which added to the index found from the neighbour cell to finally find the actualy span.
Because of the memory layout, all the parameters of spans can be easily stored in one contiguous array, which is good for compression since neighbour parameters are often the same. In practice only the span y and area type are needed to rebuild compact heightfield.
For the base grid, it is only necessary to store the span count per grid cell. The index can be recalculated by accumulating the counts. 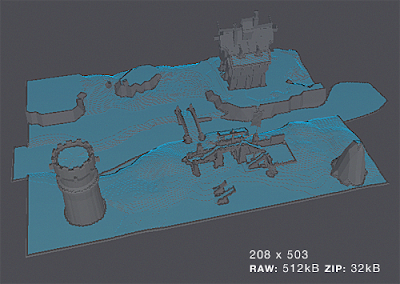 The above picture shows 2.5D heightfield of size 208 x 503. The resulting compact heightfield data that is required by Recast to build the navmesh is 1662 kB.
When the data is stripped down to the minimum as explained above, the amount of data is 508 kB. Since the data is so similar it is only 29 kB after being compressed with zip! The height data should compress even better if delta encoding is added.
Conclusion
Using compressed compact heightfield could potentially be interesting solution to handle temporary obstacles. For small tiles, the rasterization can often take up to 90% of the total time required to build one tile worth of navmesh. The method would require extra data to be stored per tile, but the data should be manageable since it can be compressed by about 1:50.
Posted by Mikko Mononen at 3:08 PM