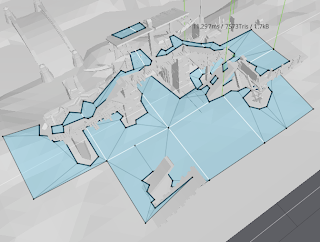 Recast 1.3 is here! This is a bit black-triangle release. The largest chunk of work has gone into bringing the tile based navigation mesh into Detour. The demo is not very extensive yet.

I also went and changed the detour names a bit. The tiny migration guide is that the static mesh types are now prefixed with dtStat instead of dt, for example dtPoly is now dtStatPoly. You also need to include the DetourNode.h/cpp as well as DetourCommon.h/cpp. The first contains the node pool and queu and the second one contains common utilities shared between the two different implementations.

The demo currently works so that when you are using the Create Tile tool (it's detault tool), you can create (click) or remove (shift-click) navmesh tiles on the fly. Do not forget to press Build once before you start clicking! The unexciting trick there is that tiles are generated on the fly. It is kinda obvious if you just click around, but it is magic, trus me ;).

The magic that the tile navmesh does is that it links adjacent navmeshes together on the fly in quite efficient way without much calculations or memory allocations. Currently the tiles in the demo come from the Recast build process but it is possible to create them beforehand and stream them in as you need 'em. It is possible to also calculate the tiles for certain world states (bridge intact and destroyed) and swap them, or calc new tiles on the fly as your world changes. I will write more this in next post.

I also did some revamp for the gui, the OpenGL specific stuff lies now in separate file, maybe one day it may be possible to put that gui code into library too. I also changed to use Sean Barrett's awesome stb_truetype.