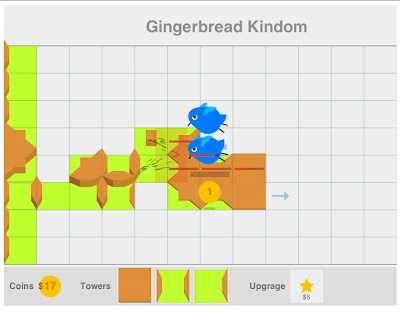 Last weekend I took part in Ludum Dare game development compo. I've been jealous to Jetro for a long time because he always manages to make something great in these compos. So I took the time and bit the bullet myself.

The game I made for the compo is called Gingerbread Kingdom, it is kind of a mix between Carcassonne, Tower Defence and Rampart.

I set a couple of constraints to myself before I started: 1) Simple, 2) 2D Game, 3) written in Javascript. I often manage my daily work using disposable prioritized todo lists (Babauta style), and I often doodle pictures to set myself longer term goals. The castle and the giant in the above picture is the one that kept me going in the Ludum Dare concept (even if giants turned into birds later on). I had the idea of using the Carcassonne tiles from get go. When I saw the last theme voting, it was quite clear that it would fit in any of the ideas.

Equipped with these ideas I started to work on placing the tiles, finding complete castles and scrolling the area. Initially I had the idea that the world would be infinite (of course!), as I went on I kept on making it smaller and smaller, until at very end I removed vertical scrolling. On hindsight,  I think the game would be twice as fun if it did not have any scrolling at all.

One tile placement was working and I could detect the castles, it was time for some enemies. At this point the world was still infinite and I struggled to figure out a way to spawn enemies from any direction without making the game too frustrating. In the spirit of getting things done, I just made them always spawn from right, and afte I had implemented the first version, I did not see any reason to make it more elaborate.

Once I got the basic conflict set up, the hardest part of the project started: balancing. This was around the evening of the first day, and I was getting a bit worn out already. And boy was it hard! The game was not fun, it was unbalanced, unfair, buggy and I just had to keep on going to play it.

To get past that stage, I kept writing tiny lists of things that needs fixing, and fixed them and moved on. After some passes I started to see a game emerging, and it was time to start pruning things. The biggest change for me was to shrink the playfield. When I got the idea to use the Carcassonne tiles, I wanted to solve the Carcassonne problem that you run out of table. It took me more time than necessary to let go of that idea.

It has historically been really hard for me to design game endings. I can kinda make ok-ish failure conditions, but defining the point where you have won a game is just somehow out of my character. For example my earlier game Zen Bondage did not have game ending at all, you just had to decide that you're done. I kinda got away with it with the Buddhist theme there :)

So when I finished my "all nighter" around 2 am the first day, I had my basic game done.

The next day I concentrated on making game ending, and making the game more understandable. My design philosophy is: use less energy to decode more information. Usually this require rounds of user testing, and reworking things. This phase usually includes adding some kind of indication to all meaningful state transitions in the game.

My favorite tools for these indicators are particle systems and procedural animations. I think the 1.5 hours I spent on making that procedurally animated bird was well worth it. I wish I had had another 1.5 hours to spend on making a simple particle system, which I could have sprinkled all over the place.

I left the winning condition to very last stage of the project. I generally hate boss battles, so that was yet another mental struggle to get through. I'm glad my fiancee insisted on having a boss fight in the end :) Once I had it implemented, I had a stream of other ideas how to make the overal progress better, but no time.


The ideas that spawned the day after when I saw people actually play the game were:

All in all I think it was a great project. the biggest lessons were that it is really hard to balance a game system when you're really tired. It turned out to be equally nasty to find bugs in dynamic language, especially refactoring was something was huuge pain. Next time I'll set up closure compiler from the start. I'm most proud that I was able to keep it simple and finish the game.
Posted by Mikko Mononen at 11:16 PM 6 comments: 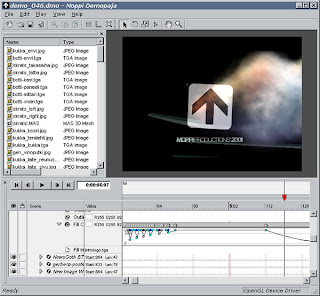 Inspired by Farbrasuch's release of their demo tools, I decided to dig up my old Demopaja backup, clean up some directories from random crap, and put it up here for downloads:

I don't have Windows dev machine these days anymore so I have no idea if it still compiles. I think it compiled back in 5th May in 2008 when I looked at it the last time.

I'm still quite proud of the tool, the documentation and all that. Even if I do despise the coding style – I was young then, you know.

[EDIT] You can treat the code public domain, some libs and snippets have their own licenses, treat them appropriately.
Posted by Mikko Mononen at 6:07 AM 29 comments: