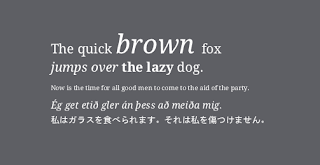 Rendering strings without OS support is always pain in the ass. Add different font faces, font sizes and languages into the mix and it is not funny any more. I like typography and I like having good font rendering in my apps. Sean's awesome stb_truetype was such a relief for me. No more big and ugly Freetype to be included with your project!

Now that actually generating the glyphs was not a problem anymore, I thought I'd try to create a font cache which would allow me to load few fonts faces and render strings as any font size I please. The glyphs are rendered and packed into a texture as they are needed. There are few recent opengl font rendering projects which inspired me on the way (that pango/cairo/clutter opengl thing and one example written in D).

Another thing that was important for me was to be able to render localized strings. I like UTF-8 for its' simplicty, and after googling around for a while I found Bjoern Hoehrmann's Flexible and Economical UTF-8 Decoder.

Putting all the pieces together is Font Stash. It's Xcode only, with simple SDL example. Should compile on VC without much tinkering. Performance should be ok-ish, there are spikes when new glyphs are rasterized and running out of cache behavior is not too nice. This release is not nice and its not clean, but it might evolve into something more usable later on.

Download Font Stash 1.0
Posted by Mikko Mononen at 5:16 AM