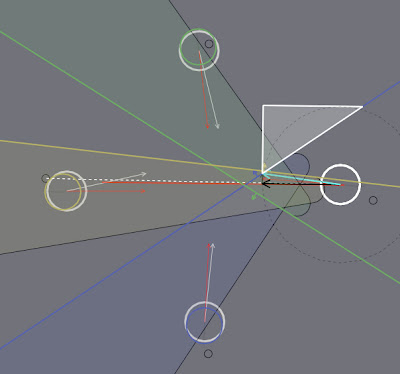 Ever since RVO2 library came out, I've been itching to dust off my old ORCA test and try to get it to work. I really like the simplicity of the method.
I don't have the required intuition to debug linear programming, so I opted to calculate the union of the constraints as polygon clipping instead. I start with a rectangle, which roughly describes all the admissible velocities, and chip away each of the constraints using poly-plane clipping algorithm in 2D. In above picture the result polygon is drawn in white.
As suggested in the RVO2 forums, in case the resulting polygon would be empty (no admissible velocities), I remove the constraints one at a time, starting from the furthest agent. You can see this effect in the above picture, the green constraints would make the polygon null, so it is discarded. This is simpler initial alternative to 3D linear programming.
While implementing the method I ran into quite a few problems. These can be due to my lack of understanding the method, or because my actual implementation differs somewhat from the RVO2 code.
Firstly, I'm visual person so I always need under-the-hood view before I can understand some method. There was quite a big leap from the agent position and velocity to the actual constraint plane. So I first spent some time trying to see where the planes come from.
Secondly, I have hard time understanding all the intrinsic details of optimal velocity, and I'm even more confused when I compare the paper vs. the library code.
When reading the paper I get the feeling that the planes should be recalculated if you choose another optimal velocity but the library does not do that. The lib calculates the planes once, as if optimal velocity would be current velocity and then uses linear programming to try to find solution to different optimal velocities.
I get super horrible feedback effect if I set optimal velocity to the current velocity, so I used desired velocity instead and things kinda work. Kinda.
Thirdly, I cannot see how the method is able to choose good constraint planes by selecting a single choice for each object. I hope I'm missing something big here.
For example, let's take a look at the picture at the top of this post. That green plane messes things up big time. Had the method chosen the other side of the obstacle, the case would have had good solution.
Even in slightly crowded scenes that kind of problems occur a lot. Many cases I traced through, calculating the constraint using optimal velocity of zero would have solved the problem. I could not figure out good rule when to choose which one of them. I tried some obvious ideas but there always was another case which failed after the change.
I would love to love the ORCA method, but I have had a lot of trouble getting it to work.
I have a hunch that the structure of the combined velocity obstacle plays big role in temporally coherent velocity selection. Fiorini & Shiller described the structure very well in their early papers, but I have not seem much research on that field ever since.
Posted by Mikko Mononen at 5:01 AM