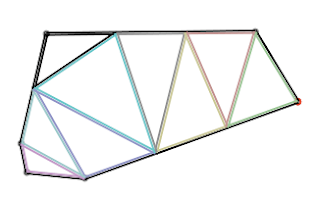 I have a love-hate relationship to all kinds of triangulations. They are super useful tools for many problems, but at the same time they are super annoying to get robust. I have been pounding my head to the wall trying to get one Delaunay triangulator to work properly.

Bourke's code is broadly used and seems quite robust too, but it fails to deliver one feature, convex hull, which is really important for my use. This seems to be common problem with Delaunay triangulators which rely on super triangle as the initial state of the triangulator.

After browsing through countless of other implementations and papers I finally found a O(n^2) algorithm last night, which seems to suit my need very well (I'm talking about the O(N^2) algorithm of the Java applet). I'm not sure which algorithm it is, it does not look like any of the usual suspects. But it does not require super triangle, and there is a case which handles the hull too. Even better, the algorithm behaves well even if manually set the hull edges myself. And finally as an added bonus, the idea of the algorithm is easy to understand visually, hence, I'm able to debug it myself too when I run into problems with it again.

Most (if not all) of the existing Delaunay triangulation implementations I could find out there fail sooner or later if you have points in your input data which are along the same line. That is a condition which majority of my input points satisfies.

I'm yet to do full set of test, but so far it looks good. The Java implementation has a couple of bugs in it, especially how it handles face labels.

[EDIT] The algorithm in question seems to be a gift wrapping variant of Delaunay triangulation. See A Comparison of Sequential Delaunay Triangulation Algorithms, the papers that paper refers to seem to be pretty hard to find.
Posted by Mikko Mononen at 2:57 AM