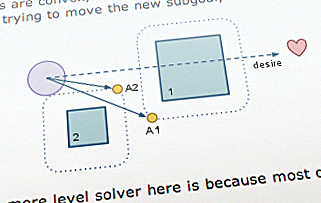 The lack of the updates on the blog recently has been mostly due because I've been writing my Game AI Conference presentation. I have done tons of research and prototyping the past 9 months, and now it has been time to draw conclusions and somehow wrap things up.
Whilst doing so, I have tried a couple of new work habits too. I'm one of those people who has a bit hard time concentrating on writing. The words just don't make sense to me. Heck, I did not even pass my A-levels in Finnish language.
I think it is mostly dyslexia, I'm one of those people who read one letter at a time, getting stuck in the curves of the letters and wander off to wonderland–unless you go and scramble all the letters the words. When I first read about it, it was a post at Slashdot, and I got scared because I suddenly read one story so fast.
A Thousand Word Head-start
Over the years one way to escape that has been to first draw a picture or diagram about the stuff I'm about to write, and then just explain what I see in that picture. I used to be graphics designer, and my favorite tool for writing was FreeHand, yes that old vector drawing tool.
It allowed me to write pictures, write a couple of paragraphs about it, and continue to explain another picture and finally bring them all together and write some sentences to glue everything into a coherent piece.
On the other hand, I enjoy writing using just notepad too. That is, the crappies writing program out there. The lack of distractions allow me to focus to the task at hand.
Google Docs for the Win
When I started to write down the "story" version of my conference presentation, I learned that Google Docs had added a feature to draw diagrams. At first I thought it was the same horrible crap they have in Word, but I thought I'd try it out. To my surprise it worked awesomely!
Firstly, it has good default color palette. Not that crappy 4-bit VGA palette with just horrible colors to choose from, nor that 216 safe web-color palette with too many horrible choices, but a couple of well chosen nice colors with few tints each. Design win!
Secondly, the tools it offers are simple to use and work well. The things that I miss from the image editor are: gradients, boolean operators on shapes, and ability to crop the drawing. I think I can live without, it forces me to leave the picture to a sketch level and keep on writing. Simplicity win!
This means that I have been able to combine the two of my best old best practices. Simple, non-distracting text editor (the flickering of that Save button annoys me, though), and simple image editor, which allows me to sketch a picture and tell about it when I get stuck. I'm visual person after all and sometimes some things are just easier for me to describe with a picture. I'm liking writing again. Now, only if I could fix my English grammar :)
Dear Google, if you are listening, please allow me to write blogger posts in Google Docs, thankyousir!
—
I just got word from Alex, that Game AI Conference 2010 just got bigger and better! The line-up is awesome, and now it has larger venue too. The event was sold out, but you have a second change to be there. You can expect an announcement of the line-up and other news very soon now. See you in Paris in June!
Posted by Mikko Mononen at 12:35 AM