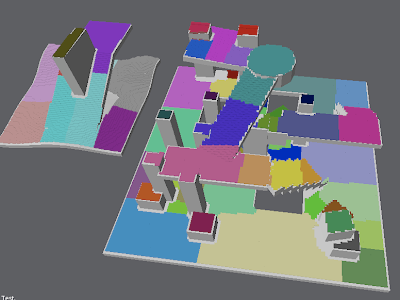 Pretty much every on project I have worked on–which have succeeded to a degree–I have had a moment when I know that it is going to work. The above image, named navtest.png dated December 3rd 2008, was the point when I knew that Recast is going to work.
Up to that point it had been a huge struggle to find a way to partition the surface. Based on the previous incarnations of the same idea (there were 2 or 3 version before that, depending how I count it) I knew that the the triangulation can easily become the bottleneck of the algorithm. So I worked really hard to reduce one dimension from the problem, and eventually it paid out.
The following months after that it was a cake walk to add tracing the contours, simplifying them and finally doing the triangulation. Four months later March 29th 2009 I made the first commit to Google Code.
Posted by Mikko Mononen at 11:28 PM