Blast from the Past pt. 2 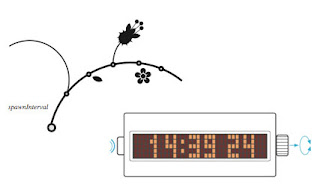 I was browsing my old hard drive last night while trying to find some old material in preparation for a lecture in a local game dev school. I found a couple of good docs I've written in 2006, which I thought would be worth sharing. The grammar in the docs is the same awful you are used when reading this blog.

Moppi Flower Explained
During the years, quite a few people have begged the source code for our demo from BP'04. Instead of sharing the code, I thought it was better to share the knowledge.

Proto Watch
I got a nice and shiny wrist watch for Christmas Present in 2006. It had the most horrible UI ever! Since I did not have internet at home during the Christmas breaks since my room mate took the ADSL modem with him, I thought I'll try to see if I can figure out a better UI for a wrist watch.

For the sake of proving my point, I also wrote a simple prototype of the concept. All the functionality was written in C using only unsigned bytes. I wanted to implement the using a micro-controller too, but then the company I was working for at the time decided it was time for yet another crunch. So we crunched instead.
Posted by Mikko Mononen at 12:45 AM